Trastevere: Our Tips for the Best Neighborhood in Rome 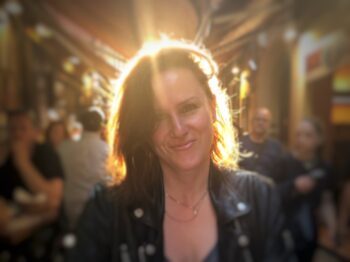 Rebecca is an absolute Italy expert, spending several months there each year.

Characterized by its flower-decked balconies, winding streets, and top-notch bars and restaurants, Trastevere is undeniably the best neighborhood in Rome. Let’s dive in to give you the lowdown on local attractions, must-sees, helpful hotel suggestions, and things to do in Trastevere.

However, Trastevere really comes to life in the evenings with bustling restaurants and bars, and the Roman nightlife filling the piazzas.

We’ll show you why you shouldn’t skip this part of Rome on your sightseeing tour and give you our restaurant suggestions and highlights.

Trastevere’s main attractions – all on one map

We’ve marked the main highlights of this article on a map of Trastevere, so you’ll know roughly where to find them.

The medieval Basilica di Santa Maria is the main church in Trastevere and well worth seeing, especially from the inside. The detailed wooden ceiling and millions of mosaic tiles that form the artworks all over the church leave visitors speechless.

You can visit the church for free, but dress appropriately; shoulders and knees must be covered.

There are several cafes on Piazza Santa Maria, and the square itself is a popular hangout for the Romans at night.

It may look like an ordinary piazza during the day, but when the sun is setting, Piazza Trilussa glows in the sunset light — the perfect setting for an afternoon stroll.

Piazza Trilussa is a popular gathering spot in Trastevere. There is a fountain in the square, and on its steps, Romans and tourists meet for aperitivo and to chat before going to dinner in one of Trastevere’s many restaurants.

Street musicians and artists will keep you entertained, and it’s a great place to either end your day or begin your evening.

Since the 16th century, a religious community has run the Spezieria Santa Maria della Scala, one of Europe’s oldest pharmacies, which is now a museum.

The baroque counter, with its many cabinets, ampoules, and instruments, is on display here, as well as the laboratory, where monks made their medicines from herbs, minerals, and animal products.

Also known as the Pharmarcy of the Popes, the bishops of Rome had their ailments treated here for centuries.

You can still find the old universal remedy theriac, which was used as an antidote for snakebites and other pains in ancient times and the Middle Ages.

Note: The pharmacy is located at Via della Scala 23 and can be visited only by prior appointment made via email at anticafarmaciadellascala@gmail.com.

If you find this ancient apothecary fascinating, Florence has an even older pharmacy, the Farmacia Santa Maria Novella, which is still in operation today.

Beneath the Church of San Cristogono is a hidden, older church that dates back to the 4th century.

In the 12th century, the church was covered up, and the current Basilica of San Cristogono was built six meters above the lower church to match the new ground level of the neighborhood.

The underground church is one of Rome’s oldest churches, and despite being hidden for 700 years, the wall paintings, some of which are well preserved, can still be seen.

The underground basilica is accessible via a staircase from the current church’s sacristy.

To the guided tour in the lower church

The Fontana dell’Acqua Paola is similar to the Trevi Fountain but much less crowded and offers a stunning view of Rome.

Located on Gianicolo hill right above Trastevere, about a 10-minute walk from Piazza Santa Maria, is the eye-catching baroque fountain. Epecially at sunset it’s worth a visit, when it is artfully illuminated.

Wedding photographers love this setting, and it has served as the backdrop for a number of films. The Oscar-winning film La Grande Bellezza‘s opening scene was shot here for example.

The Terrazza del Gianicolo is possibly Rome’s most beautiful viewpoint. Also called Terrazza de Roma by the Romans, it offers a fantastic view of Rome’s most famous monuments, such as the Pantheon and St. Peter’s Basilica.

The terrace is just a short walk up the hill from the Fontana dell’Acqua Paola. Once there you’ll find a small kiosk that makes tasty cocktails in the summer. The perfect way to end your day while relaxing with a view of Rome!

You can reach the Vatican on a 1.5 kilometer walk from the Gianicolo, passing by many of Rome’s most famous sights along the way.

A daily night market is held along the riverbank between the two Tiber bridges, Ponte Sublicio and Ponte Sisto.

A variety of stalls sell handcrafted goods, clothing, and accessories. There is also street food, music, and entertainment.

The night market always takes place between June and the end of August, from 7pm to midnight every evening.

Villa Farnesina was built in the 16th century by banker Agostino Chigi, who wanted a palace in Rome that was entirely in the Renaissance style of his native Tuscany.

The Trastevere villa is best known for its opulent halls and beautiful ceiling paintings, including some by the famous Renaissance artist Raphael.

When visiting Rome, Villa Farnesina is one of the few places where you can view works by such eminent artists without having to elbow your way through hordes of other tourists.

For that reason alone, a trip to Villa Farnesina is definitely a must.

Trastevere has a plethora of excellent restaurants. The neighborhood is regarded as the best in Rome for eating out by both Romans and tourists.

Most restaurants are only open for lunch and dinner from 12pm to 2pm, and then again after 8pm.

Here are our top restaurant recommendations for Trastevere:

Note: If you are visiting Rome for the first time, you should avoid staying in Trastevere. The Colosseum and other highlights are difficult to reach by public transportation from Trastevere.

Check out our Rome hotel tips to find out which neighborhoods are best for sightseeing in Rome.

However, if you’ve already seen Rome and want to stay in a vibrant and authentic Italian neighborhood, Trastevere is excellent.

Here are some of the most beautiful places to stay in Trastevere:

Nikis Collection Trastevere – Stylish, with a rooftop terrace, and right in the heart of it all. The Nikis Collection is a guesthouse in a quiet alley in Trastevere, just a short walk from the bustling Piazza Trilussa. The Ponte Sisto bridge, which connects Trastevere to the old town, is only a few minutes away.

Hotel Santa Maria – A former convent with a stunning patio. This Mediterranean oasis with orange trees and terracotta floors is located in the heart of the lively Trastevere district. On the lush patio is a bar that serves wine and cocktails.

How to get to Trastevere

Trastevere is not well connected to the rest of the city and there are no train stations directly in the neighborhood; the nearest station is about 20 minutes away on foot at Circo Massimo.

In the adjacent neighborhood of Monteverde is a train station called Trastevere, which you can reach directly from Fiumicino airport, but it is not in Trastevere. Take streetcar line 8 from the station to get to Trastevere’s center.

You can also take a 30-minute stroll from St. Peter’s Square or the Colosseum to Trastevere from the old town if you like to walk.

It’s also possible to take a bus or a taxi. Catch the H bus from Termini Station and arrive in Trastevere in no time.

These were our tips for the best neighborhood in Rome: Trastevere!

Have you been to Trastevere and have additional suggestions? Questions? Please leave us a comment!

Read all our posts about Rome:

All our Rome posts